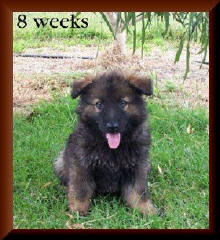 German Shepherd’s do come in many colours, one of which is a Sable (Agouti). Also there coat is now called Black with Brown. The sable dog is well known in the Police force and high security jobs. But not well known in the show rings. This is were we are going to change things as we do like a challenge. Now that we can show the Long Coat German Shepherds. It will be good for people to see the different coloured German Shepherds instead of thinking that they have to be or are Black and Tan or Black and Gold. The Black Sable German Shepherd dog is not everyone’s cup of tea. But for you out there that like to have some thing different to the norm we are hoping to have some sable puppies due in the near future. For more info on the not so well known sable please feel free to click on link below.   http://www.truehaus.com/sable.html